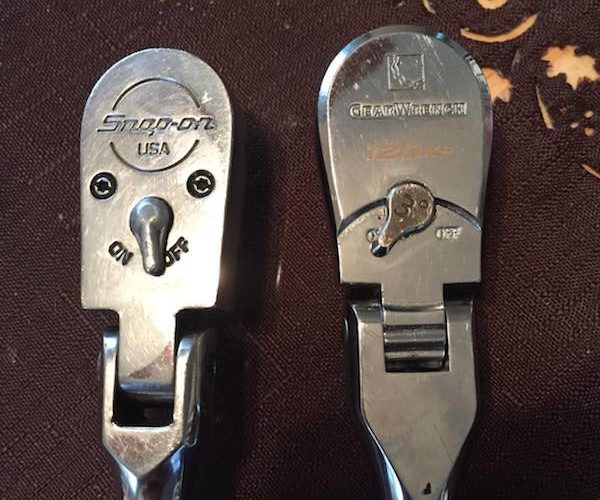 Gearwrench’s newest set of ratchets is the 120xp, which uses a dual pawl system to give a 120 tooth feel ratchet with the durability of a 60 tooth ratchet. The 84 tooth Gearwrench ratchets were the predecessor to the 120XP ratchets, and while they did have an 84 toothed gear they proved themselves very durable. Based on my research the 84T ratchet by Gearwrench is extremely well-made and durable, but the 120XP ratchets are better in that they allow you to tighten fasteners in even smaller spaces with only a 3 degree of arch per click. The 120xp is also better than the 84t ratchets in that they have even less backlash than the 84t Geawrench ratchets. Meaning it is easier to start and loosen bolts all the way without having to hold the bolt with your free hand.

The 120xp ratchets are a little bit more expensive than their 84 tooth counterparts. However, both come with a lifetime warranty. Both the 84t and the 120xp are a great line of ratchets made by Gearwrench, perfect for the DIYer or weekend warrior and professional mechanic alike.

Overall, the ratchet set I recommend every DIYer or starting mechanic own is the 120xp Gearwrench 4 piece ratchet set (click to see it on Amazon.com)

In addition, it also includes a 3/8″ stubby driver for those tight spots.

If you buy this set you will be well on your way to having a socket wrench for every job. If you don’t already have a 1/2″ breaker bar (My personal favorite on Amazon.com), make sure to grab one and remember that no ratchet is made to be a breaker bar regardless of how tough they are.

What are the differences between the Gearwrench 84t and the 120xp?

Gearwrench designed the 120xp ratchets to have the hand feel of a 120 fine-toothed ratchet, with the durability of a 60 toothed ratchet. The way they were able to do this is by stacking to paws on to of each other, giving the ratchet 120 clicks per one full rotation instead of just 60. The mechanism of the 120xp ratchet has two paws, compared to the 84 toothed Gearwrench ratchets which only has one paw. Some people argue that the less moving parts in a ratchet the better, and for that the 120XP is more likely to sometimes bind up, but it usually quickly starts working again.

The 84T ratchet from Gearwrench is basically your standard ratchet. It has one pawl, an 84 tooth geared head, and an on/off selector. Over the last three years, I have owned my 84t ratchet set I have found them to be extremely durable, easy to use, and at an unbeatable price point.

The 120XP ratchets are the newest release from Gearwrench in terms of innovation in their socket wrench department. The dual pawl setup works great, and everyone agrees they’re durable, offer amazing hand feel, and will hold up to daily beatings.

One pro tip: make sure to add some lubrication to the head of any Gearwrench ratchet. White lithium grease works well. Just a little dollop will make sure everything works smoothly. A lot of people find the Gearwrench ratchets do not have grease in them or a very tiny amount.

Having a fine-toothed ratchet comes in huge handy when tightening anything in a tight space. Gearwrench says the 120xp ratchets have a less than a 3-degree arc. Which means you only have to move the ratchet a tiny bit of space to be able to tighten the bolt again. The 84t ratchets are also fine-toothed by all standards but are not comparable to 120 teeth action of the 120xp ratchets. That means easier tightening and loosening of those hard to reach bolts and fasteners.

Compare a 3-degree arc to say a 10-degree arc on some older Craftsmen ratchets. It really makes a huge difference, and you will notice it if you work on cars daily.

What’re the cons of fine-toothed ratchets? Why only 120 teeth?

It is a good question and one that the answer lies in an understanding of general physics.

Here is a simple explanation that I hope you can follow along easily. The very fine teeth of the ratchet mechanism would begin to be so fine that the pawl would not be able to engage and hold them under any sort of torque.

This works better if you understand the mechanism of a ratchet, but if you think about the tooth count as similar to the ridges on the side of a quarter it can help.

To help you understand the parts of a ratchet look at the photo on the right.

Since you now have a better understanding of the internal mechanisms of a ratchet we can continue with the quarter metaphor.

Well, that same principle applies to the headgear in a ratchet. There is a drawback to increasing the number of teeth in a ratchet, it negatively impacts the strength of that ratchet in the face of strong torque.

So how did Gearwrench solve the problem of having too many teeth in a ratchet head?

Introducing the two pawl system. This means they didn’t have to cut 120 teeth into the head mechanism because they used two pawls to engage the 60-tooth head.

Pretty cool? I think so.

Normally the weak spot on any ratchet is the actual drive part that extends into the socket.

Why the 84t Ratchets are also great:

When it comes to ratchets the difference between 120 and 84 teeth may not be as huge as it sounds. My 84 tooth Gearwrench ratchet is the one I use on a daily basis, and it feels miles better than my much lower tooth count, and therefore, rougher Snap-On or Craftsmen ratchets.

The other drawback to the 120xp ratchets is some users complain of a slightly larger ratchet head and more backlash on the return.

The backlash on the return stroke means more resistance from the ratchet to clicking over to the next tooth allowing you to tighten the bolt again.

Here is a better explanation of backlash. Backlash is basically the slop that you feel between teeth, giving the ratchet a “dead space” feeling where it is neither engaged going forward nor clicking over to the next tooth.

Hard to explain, but much easier to understand is that having a lot of backlash is not good in a ratchet. You want the least amount of backlash possible.

Yet, you need to understand that some amount of backlash is inherent in the design of a ratcheting system. To read more about backlash here is the Wikipedia article.

The best way to help prevent backlash in a new ratchet is to grease the head of the ratchet with white lithium grease. You will need to remove the snap ring, remove the dust cover, and install grease onto the pawls and gearhead.

They have also held up over time. I use them frequently with little regard by me to being gentle to it.

You also can’t argue with the pricing on these Gearwrench ratchets. An entire set of the 120xp ratchets costs less than a single comparable ratchet by Snap-On. I did some research and I found an awesome deal on Amazon for the 120xp ratchet set here.