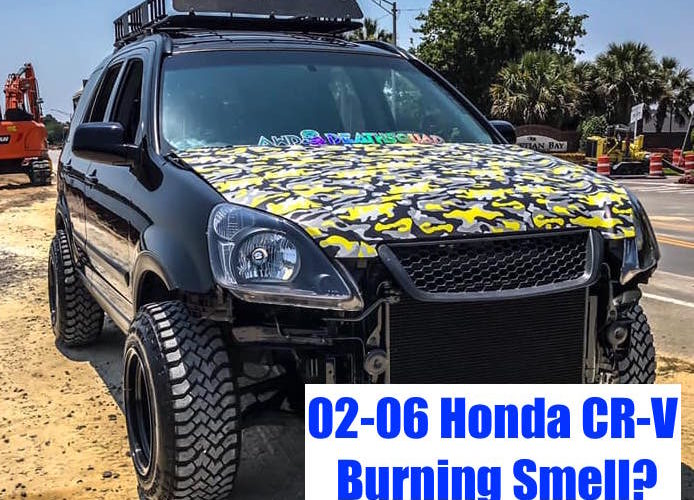 Do you have a 2nd generation Honda CR-V (02-06) and are experiencing a burning smell after driving and can’t figure out where it is coming from?

My friends Honda CR-V kept smelling like burning after driving so he finally asked me to take a look at it. Here is what we found and some tips to finding out what is causing the burning smell fast on your CR-V and how to repair it.

1. Is burning smell coming from engine bay or brakes?

2. If it is a sticking brake caliper we need to know which one it is with these easy tips.

One other pro tip for finding the sticking rear caliper is to go for a short drive then feel the rim or the actual brake rotor. Be careful not to burn yourself, but does one rotor or rim feel way hotter than the other? Once again that is another great indicator of a sticking rear caliper.

The steps to replacing the rear caliper on a Honda CR-V are the same as any basic car. There are no special tools needed or need for any electronic caliper tools.

Sticky Calipers Can Cause Much More Damage:

If you ignore a sticky caliper and don’t figure it out quickly here is an example of what can happen that can end up costing you a lot more money.

It almost happened with my friend’s car they had put off fixing it for a while and the rear brake pads had worn down to the indicator bar. If they had kept driving then the rear pads on that side would have worn down to the metal backing plate on the pad.

This would have ruined the brake rotor on that side, and the rotors on the CR-V aren’t the easiest to replace since you need to adjust the emergency brake after replacing them. It could have also led to them being stranded somewhere when the rotor actually finally got red hot and started smoking or worse started on fire. (This happens).

You can also end up boiling your brake fluid and have all sorts of trouble if you let a sticky caliper keep causing problems.

My advice, if you smell burning in your CR-V figure out if it is coming from the brakes or the engine bay and diagnose and fix the problem before it becomes a big headache. If you are just smelling the brakes because you drove with the emergency brake on, then hopefully you remember to take it off next time!