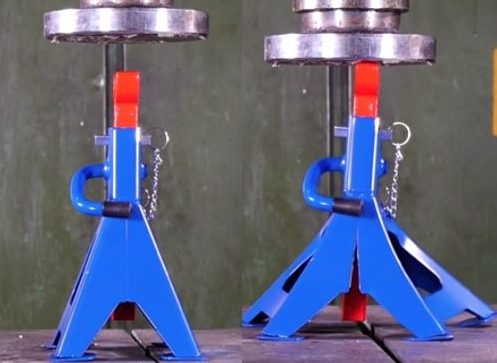 Are you researching jack stands to buy?

Confused as to how they are rated and what the weight ratings mean?

I found it confusing as well. So I did some research and compiled this guide to understanding how jack stands are rated, and why it is so important to understand when buying jack stands.

Jack Stands made after 2015 are always rated as a pair. Meaning 6-ton jack stands are individually rated to hold a maximum of 3-tons. They are also only rated when used as a pair together.

How Jack Stands Are Tested:

Make sure you are buying ASME certified jack stands
I just got off the phone with a representative from US Jacks. He told me that to meet the standards set up by ASME each jack stand must be tested to 150% of the rated capacity of the pair to pass. Therefore, a 6-ton rated jack stand pair each individual jack stand would be tested at 9-tons. As long as the jack stand doesn’t fail at 9-tons on a single jack, then the pair passes as a 6-ton jack stand with ASME certification.

How do they measure whether or not a jack stand fails the ASME test? The jack stand must not have a permanent reduction in overall height, measured after the removal of the load, at the point of load contact shall not exceed 0.125 in. Source.

However, each individual jack stand is NOT tested before it is sold. That is why I stress buying jack stands for a quality brand is so important, they will have their own quality assurance procedures. Typically the way it works is companies send in a pair of jack stands for testing, and also test them in house, but once they are certified there doesn’t seem to be any regular interval that they are checked.

Avoid buying the cheapest jack stands. They are the only thing keeping the car from crashing down on you while underneath it. Spend a bit more!
Just because a jack stand has a high weight rating does not mean it is a quality jack stand. Not every jack stand is individually tested by any quality assurance board that is looking out for you, the person underneath the car. That is why I cannot stress enough that when buying jack stands you should always buy a much bigger jack stand than you need.

Jack stands literally keep your car or truck from falling on you while you are under it. You are trusting your life to them, and therefore you have a couple options. You can either buy the cheapest of cheap jack stands and figure they ought to work okay. Or you can spend a little bit more money and get a much higher-quality jack stand that you will confident getting under.

As a general rule of thumb, the heavier your car or truck is the more dangerous it is to be under. When we used to race stripped out Mazda’s at Laguna Seca (chump car) we would literally just lift the back end of the car onto jack stands with two or three guys. For that car, any jack stands would work, but when you’re talking about getting under a Ford F-350 Dually Diesel truck you need to be way more careful what jack stands you are using.

Things to Look for when Buying Jack Stands:

What Jack Stands Weight Rating For A Car?

Are you looking for the right jack stands for a car? Let’s use a 2016 Cadillac CTS as an example to figure out what would be a good weight rating for that car. I chose the CTS because it is a fairly heavy four-door sedan, as a comparison a 2016 Honda Civic weighs around 500-1000 lbs less depending on options chosen.

The most common jack stand size for most DIYers and home mechanics are the classic “3-ton Jack Stands.”

3-ton jack stands are rated to hold a maximum weight of 6,000lbs.

The important thing to keep in mind is once you have the right weight rating for your vehicle that you need to focus on actually getting a quality jack stand pair. If you buy cheap, the weight rating is meaningless, as you are just increasing your chances that there may be a defect in the manufacturing which can endanger your life.

What Jack Stands Weight Rating For A Large Truck?

Let us take one of the beefiest new dually trucks on the market and figure out what jack stands are best. So, for this example, we will take the 2019 Ford F450 Dually which weighs in at 7,730 to 8,600 lbs.

If we were to jack the front end of that truck up and put it on our pair of 3-ton jack stands would it hold?

Once again the 3-ton jack stands can hold 6,000lbs as a pair. Since we are only lifting the front of the truck up we can assume a thousand or so pounds would still be resting on the rear tires.

But is it safe? 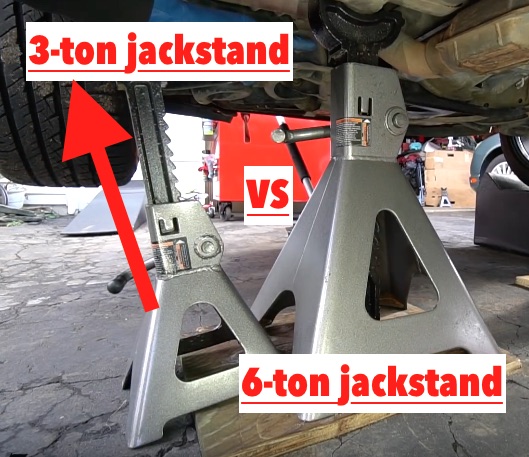 I have personally seen jack stands start to crimple and bend over time when pushed not even near their “rated” limits. Why? Because they were cheap, and not the right tool for the job.

In my view, if you’re working on anything larger than a honda civic or a Toyota truck, you need to be buying jack stands over 3-tons. For this Ford F450 truck, we used as an example above, I would only get under it using 6-ton jack stands.

But here is the important thing to keep in mind, the quality of the jack stands is almost MORE important than their weight rating. This also assumes you understand how to safely use jack stands and put them underneath a car properly. Jack stands aren’t the easiest things to line up when you’re trying to get a car to sit on them. Make sure you understand choosing jack points and jack stand locations before even attempting to get under a car.

Just check out these photos and see if you can guess which ones are cheaper and which are more expensive.

People don’t die all the time under failing jack stands, but it does happen. People get hurt and there are even lawyers that specialize in representing people injured by jacks and jack stands that fail. Click here to see for yourself.

“Even with many years of quality assurance and lawsuits that target companies that market and distribute faulty products, many cars and auto parts make it to the American market only to be recalled because of defects. “

Click here to read the top 10 inventions that have made car repair easier in 2019.